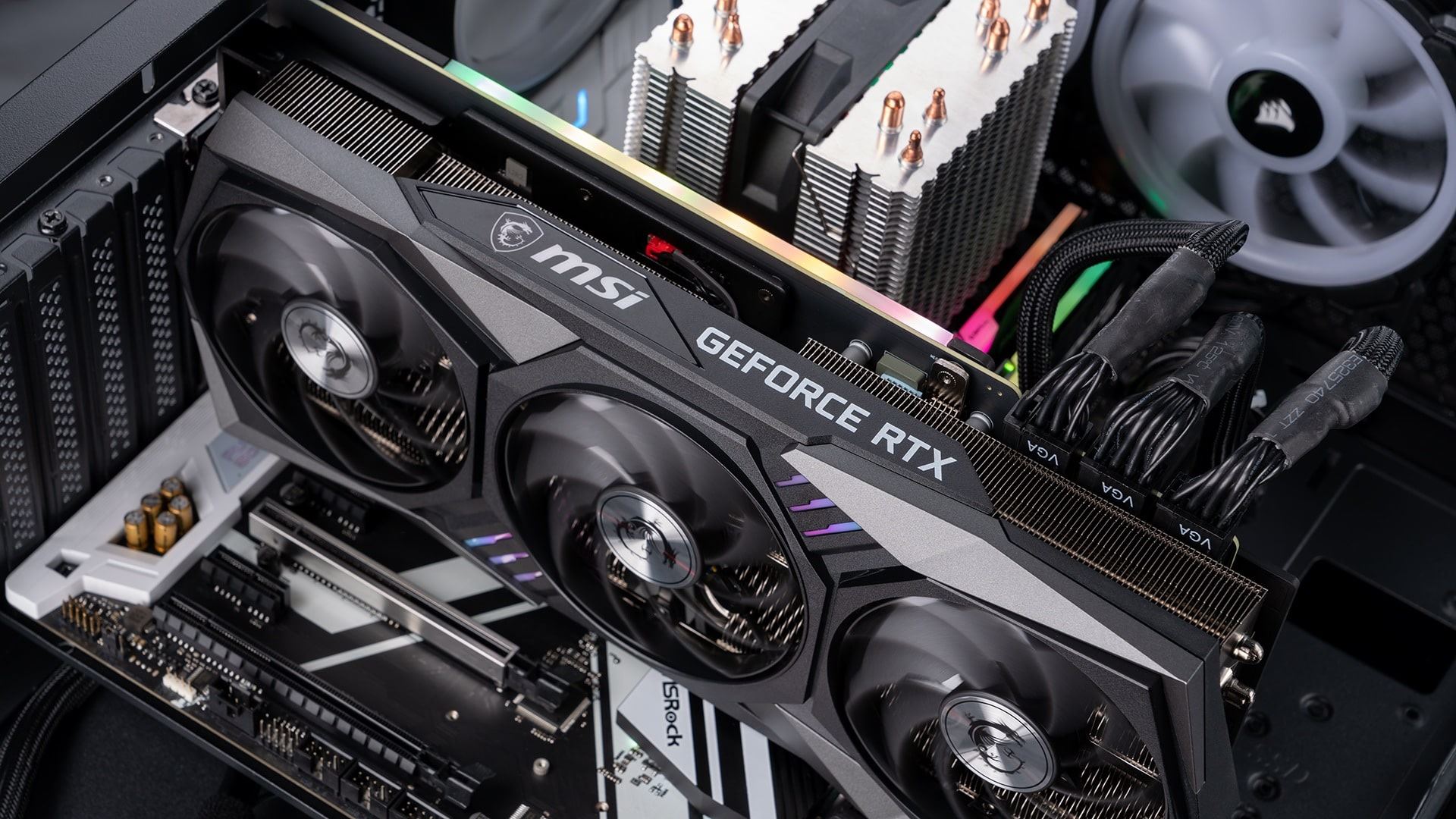 Every tech user has experienced the malfunctioning of the device at some point of use, it’s common and that happens to almost everybody. But when you see the sudden stopping of gadgets it is alarming.

GPU in the computer is one of the highlighted components that need extra care for keeping the functionality in sync. While cooling it down is a crucial factor for its smooth operation, there are still more

However, if you are worried about how to fix a GPU fan that is not spinning or maybe spin periodically, the solution mostly lies in simple solutions. We’ve sifted out the clever ways they will help you out, but before that let’s see what causes the stillness in GPU fans.

As a matter of fact, there are many graphics cards that do not spin unless they reach a certain temperature range. Therefore, the passive cooling system becomes the ultimate assisting parameter to help get the noise at length. Moreover, if you do not clean the fan properly, the accumulated dust becomes the reason why your GPU fan isn’t spinning the way it is supposed to be.

How to fix the poor spinning of GPU fan

Many of the GPU fans feature the pre-designed passive cooling heat-sink. So when you are browsing or doing light tasks, the passive cooling starts to work out. Therefore, if the fan isn’t spinning in that case, it is not a big deal to worry about.

Remember when you were quite new to PC usage and getting stuck at any point only led to ‘restart’ the computer? Well, pushing the restart button is still an answer to many questions and concerns in the computer world.

If your GPU fan isn’t spinning, the simple and quick fix is to restart the computer. It refreshes the background applications and hence things work effectively, even more.

When it comes to a hardware problem, the solution is most likely in hardware too. For the graphics processing unit, the power should be even and without fluctuation_ basically GPU requires more power to output the best.

So to fix the mal-spinning of the GPU fan, check the power connector whether or not they are attached securely. The combo of 6 to 8 pins is what you usually have, and if it is not pushed within the card correctly, the fan gets affected to spin around.

The correct GPU sitting in the PCI-E slot on the motherboard is also an important factor. However, if the ports are not responsive enough, the shutting down of the PC is something you cannot do anything about.

Using the oil for jammed and still machinery isn’t something that only mechanics would use. If the GPU fan is having a problem working swiftly, oiling can be another solution you should try out.

When the fan bearings loose or fade out on the smooth spinning approach the fan gets stuck and that’s why you need to make the machinery operational, it happens if your computer system is pretty much older. You can use the drops of any oil (aside from cooking oils) such as the sewing machine oil. All you have to do is to: 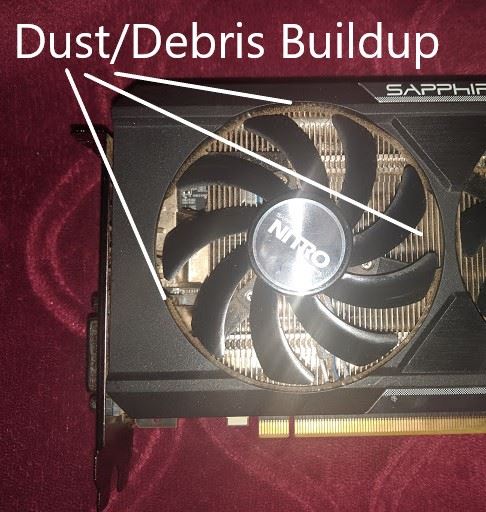 If you make sure the GPU fan is free from clutter and dust from all around, you will notice the high-end efficient output of the PC as well. Jam or poor spinning can be the build-up layers of dirt. Therefore, low torque means slow of no GPU fan movement.

With their very function to move hot air away from the GPU, the fans continuously interact with errant particles and dust that invariably ends up inside a PC. Over time, this debris comes to rest on the blades. The problem is especially prevalent if the PC hasn’t been used or cleaned in a while.

There are many software and tools that will help spin the GPU fan in order. If the above mentioned methods aren’t working, get to the best drivers from the Nvidia/ AMD online websites by ensuring the model of your GPU. Install the drivers and if you already have it, reinstall it.

However, if you have installed a driver that has just been updated or maybe the installation process is lacking preciseness, the GPU fan can affect its spinning.

Not only for fans but running heavy software or games tells you the actual performance of your system. How much load it can bear is crucial to know. If the GPU fan isn’t spinning well, you can either run a game, or install the MSI Afterburner tool, checking the fan spinning speed in RPM. 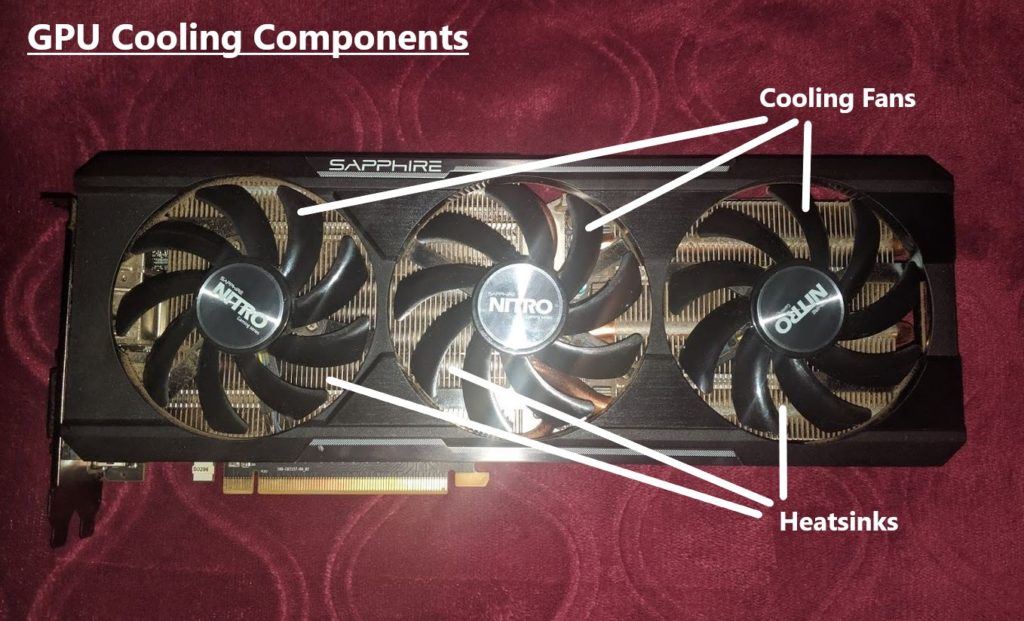 It is not always a straight answer to a thing. If your GPU fan isn’t spinning you should try every possible way to fix the issue. Testing the GPU fan in another test PC is an option that will tell you whether the problem is in your PC or in the GPU fan itself is faulty.

And if the GPU fan is spinning as it should, the motherboard of your actual system may be the real cause of poor GPU fan spinning. Replacing the motherboard can fix the issue in that case.

And finally, if none of the solution is working you can also decisively replace the fan with the efficient one. Tool old GPU fans decrease its efficient approach for spinning. Moreover, when cleaning, oiling and software assist isn’t working out, the problem is most likely to be the hardware relevant. Mechanical malfunctioning is obvious when you are using it on a regular and non-stop basis.

All in all, it is true that sometimes the problem isn’t that big. So always start from the internal functions and then check the hardware etc.

Besides, a pro tip for keeping the best performance of your computer system as well as GPU fan is thorough clean up sessions. Vacuum cleaning, and checking out of the internal components is a must factor every once in a while.